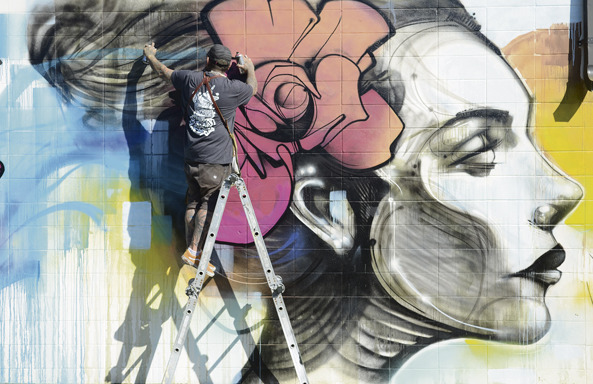 A new mural painted by Jayde Goodon (on ladder) is going up in Kinsmen Park this week. It’s expected to be completed by Sept. 6.

(Peter Lozinski/Daily Herald) A public art project has made Kinsmen Park just a little bit brighter. The City of Prince Albert is working with Saskatoon-based Métis graffiti artist Jayde Goodon, who paints under the name WizWon, on a mural on the west side of the Kinsmen Water Park building, just off of First Avenue est. The mural is expected to be completed y the end of the week. The mural depicts a woman looking south in front of a background of various designs, including a splash of blue designed to emulate the water. The mural is part of the city’s public art program, which “aims to provide a visually rich environment in Prince Albert,” the city said in a media release. “They wanted something with water, so I got the background with the blue flowing,” Goodon told reporters Tuesday. “I’ve always been painting women’s faces, and I’m a tattoo artist, so I’m trying to add those elements into what I’m doing today.” Goodon said he’s been painting walls since he was in high school, and has been a tattoo artist for about 11 years. “This is what I like doing, a lot of abstract, more lines and flowers, women’s faces … when I paint walls it gets pretty bright.” Beyond the basic design, approved by the city, Goodon is adding artistic flourishes to brighten up the design. Goodon is a graffiti artist. His modern style seems to be a hit with residents. “People see me using spray paint, and I’m getting nothing but positive compliments,” Goodon said. “The people across the street have been there for 50 years and say that they love it.” Even as Goodon was speaking with reporters, two drivers passing by rolled down their windows and complimented Goodon on his work. This isn’t Goodon’s first mural in Prince Albert. Two years ago he was contracted by the Indigenous Peoples Artist Collective to complete the mural of Louis Riel downtown. That […]