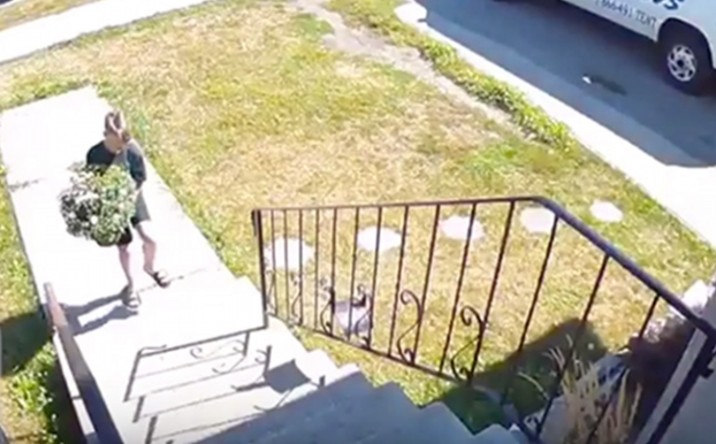 A boy took it upon himself to replace his neighbour’s stolen flowers.

VERNON – When Laine Mariah awoke to see that the potted plants on her doorstep had been stolen, the last thing she expected was to come home to a new plant later that same day. Mariah and her husband reviewed surveillance footage after noticing the missing plants Sunday, Sept. 1. A video depicting the theft was posted to social media and, within a few hours, had been shared several times. Police were contacted and visited the scene. “Shortly after that, we went out for the day and were pleasantly surprised to see a brand new pot of beautiful flowers had been replaced where our stolen ones once were,” Mariah said. “We felt touched that someone went out of their way like that to brighten our day. Our two young sons were so excited after being so disheartened that the flowers they helped me water every day were ripped off.” Intrigued by the act of goodwill, Mariah reviewed the security footage again. The video revealed the person behind the good deed: a young boy. “We couldn’t totally see his face, but suspected he was our neighbour’s son. While she was out watering her garden, my husband approached her that evening and asked her if it was her son. She confirmed it was and that it was all his idea,” Mariah said. “Through the magic of social media, she saw what had happened and showed her son.” Mariah said her six-year-old made the boy a thank you card the next day. READ MORE Thief caught on camera in Lake Country To contact a reporter for this story, email Parker Crook or call (250) 864-7494 or email the editor . You can also submit photos, videos or news tips to the newsroom and be entered to win a monthly prize draw. We welcome your comments and opinions on our stories but play nice. We won’t censor or delete comments unless they contain off-topic statements or links, unnecessary vulgarity, false facts, spam or obviously fake profiles. If you have any concerns […]