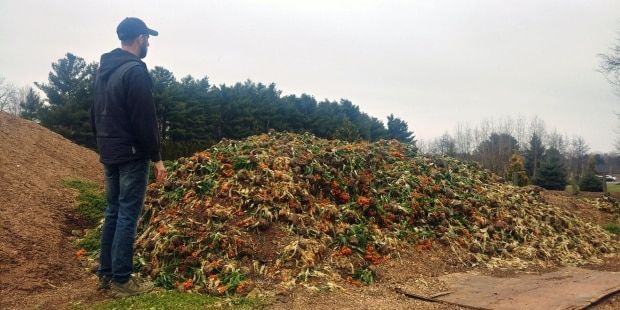 'Heart-wrenching': Canadian flower farmers forced to throw out months of work amid pandemic

Some Canadian flower farmers are grappling with the unimaginable: throwing heaps of flowers and months of work away as COVID-19 restrictions lead to an unprecedented drop in sales at a time when

business should be booming.

After non-essential businesses were closed across Canada in March due to the pandemic, adjustments to allow garden centres to open were made in Alberta, B.C., Manitoba and Quebec — but not all provinces have followed suit, leaving some in the flower business struggling.

Farmer Jan Van Zanten says he'll be lucky to sell just 30 per cent of his main spring crop; the rest he's either giving away or tossing out.

Van Zanten and his employees planted ornithogalum, also known as sun stars, back in September. There is a three- to four-week window to sell them in the spring. After that, the flowers' blooms are too open to sell.

He sells most of his flowers to greenhouses, which then combine and distribute them as part of bigger orders.

A drastic drop in demand at this critical time for Van Zanten means he may not earn enough to keep the family business alive next year.